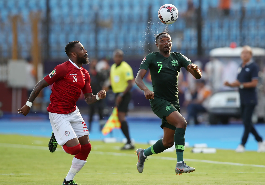 West Brom manager Sam Allardyce has confirmed that the Baggies are interested in signing free agent Ahmed Musa in the January transfer window.
West Brom have requested a UK visa for the two-time World Cupper and he's expected to arrive in the West Midlands this week for a routine medical.
With only 15 goals scored in 19 Premier League matches, Allardyce is in the market for a striker and is believed to have turned his attention to Musa as it would be difficult to sign Crystal Palace's Christian Benteke and Newcastle United's Andy Carroll in this window.
Musa's fitness will be assessed and if the striker is in good condition, he's expected to put pen to paper on a short term deal until the end of the 2020-2021 season.
Speaking to reporters at Monday's press conference ahead of the meeting with Manchester City, Allardyce replied when asked about Musa  : "He’s not here yet. He’s a person of interest and when he arrives we’ll alert everybody and let them know".
Musa appeared in 33 matches across all competitions, scoring 5 goals, during an eighteen-month spell with Leicester City before he was sold to Al-Nassr after starring at the 2018 World Cup.
Ifeanyi Emmanuel