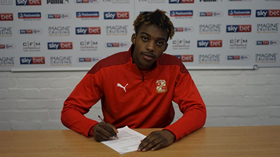 EFL League One club Swindon Town have officially announced the signing of highly-rated Nigerian striker Tyrese Omotoye from Norwich City, subject to EFL and FA clearance.
The 18-year-old has been loaned out by Norwich City for the remainder of the season in order for him to get more first team opportunities.
Omotoye has made four senior appearances for the Canaries, most recently against Barnsley in the Emirates FA Cup when he played the last 25 minutes.
His other three appearances also came off the bench in Championship matches against Luton, Sheffield Wednesday and Nottingham Forest, logging seven minutes in total.
He has impressed in the Papa John's Trophy this season, scoring four goals in the group stage with the highlight of his performance being the hat-trick he bagged against League Two opponents Newport County.
Omotoye joined Norwich City at the age of twelve and signed a contract extension with the club until the summer of 2024 last month.
Igho Kingsley
Photo Credit : swindontownfc.co.uk
Copyright ANS