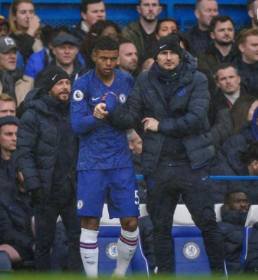 Faustino Anjorin has taken to social media to write a farewell message to Frank Lampard who was dismissed as Chelsea coach on Monday, January 25.
Chelsea owner Roman Abramovich was unimpressed with the club's form in the 2020-2021 season and decided to do away with the services of the coach.
Chelsea are currently sat ninth in the Premier League standings following a run of five defeats in eight league games.
The Stamford Bridge outfit were active in the last summer transfer window, spending close to 220 million pounds to bring in Timo Werner, Kai Havertz, Ben Chilwell, Hakim Ziyech and Edouard Mendy.
Anjorin was seventeen years when Lampard, Chelsea's all-time record goalscorer, handed him his professional debut in a 7-1 rout of Grimsby Town in September 2019, before making his Premier League bow against Everton last March.
The England legend promoted the Anglo-Nigerian midfielder to first team training on countless occasions, even in the days leading up to his sacking.
Writing on Instagram, Anjorin stated : "Thank you for making my dream come true!💙"
Former Paris Saint-Germain boss Thomas Tuchel is the current favourite to be appointed coach after Lampard's dismissal.
Ifeanyi Emmanuel
Copyright ANS