...the complete Nigerian football portal
Subscribe
'Great Honor For Me To Play With Ozil' - Osayi-Samuel Wants To Benefit From Ex-Arsenal Star
Published: January 26, 2021 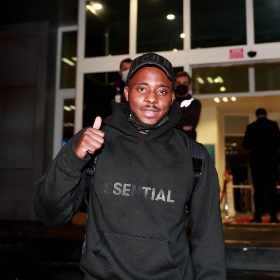 Bright Osayi-Samuel landed in Istanbul on Tuesday morning ahead of his unveiling by Turkish Super Lig side Fenerbahce.
The former Queens Park Rangers winger says he's excited to be joining one of the biggest clubs in Turkey and the fans have supported him by sending welcome messages to his social media accounts.
Osayi-Samuel links up with former Arsenal star Mesut Ozil at Fenerbahce, a player he idolised in his formative years as a footballer, and he has acknowledged that players are under pressure to perform well in big clubs.
Speaking to Fenerbahçe Television at the airport, Osayi-Samuel said :"Playing with the big stars is a great chance for young players. It is a great honor for me to have the chance to play with a player like Mesut özil.
"I used to watch him when he was young, and now I will train with him on the same field and play on the same team together. What I have to do is work hard and benefit from his experiences."

On his message to the fans of the Yellow Canaries, he said : "To give a message to our fans, as I said before, I like challenges. Therefore, I was transferred to a big club like Fenerbahçe.
"I believe that if I work hard and do the right things on the field, I will make them happy."
Osayi-Samuel departs Queens Park Rangers after scoring thirteen goals in 115 appearances spread across three and a half seasons.
Ifeanyi Emmanuel
Photo Credit : fenerbahce.org
Copyright ANS