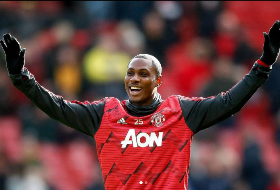 Former Nigeria international Odion Ighalo has announced his departure from Manchester United, five days before the expiration of his loan deal with the Premier League giants.
The Shanghai Shenhua-owned player initially joined the Old Trafford outfit on a five-month loan deal last January but the deal was extended due to the coronavirus crisis and his impressive performances especially in cup matches.
United's signing of Uruguay marksman Edinson Cavani last October saw Ighalo fall down the pecking order of strikers, limiting his appearances to only four this season, the last of which came against Paris Saint-Germain exactly eight weeks ago.
Overall, the 2019 Africa Cup of Nations Golden Boot winner netted 5 goals in 23 games for Manchester United, including a brace against Derby County in last season's Emirates FA Cup.
Writing on Instagram, Ighalo stated : "It’s so hard to see this dream come to an end . But I give God the glory for helping me fulfill this life long dream of putting on a Manchester United shirt as a player and represent this great club , it was indeed an honor I will forever cherish and be grateful for .

"To the Manager I say thank you for trusting and believing in me when many did not , to my amazing team mates I will miss you guys , it was always fun and a time i look forward to training and spending time with all of you .
"And I pray we win the LEAGUE and FA cup this year 🤞

"To the best fans in the world ( the Manchester United fans ) we have missed you , but we hear your voices cheering us on from afar , we can’t wait to have you all back on the stands .