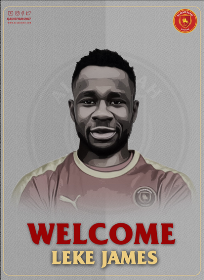 Saudi Arabian Professional League club Al-Qadisiyah have pulled off a transfer coup by signing Nigerian striker Leke James on undisclosed terms.
The 28-year-old was courted by a host of clubs in Europe and North Africa before he agreed terms with Al-Qadisiyah.
Norwegian club Molde were eager to tie him down to a new deal but the offer from the Saudi Arabian club was too good for him to turn down.
James departs Molde after making seventeen appearances in European competitions for the club, scoring seven goals.
He wore the colours of Bridge Boys in his homeland before switching to Aalesund, where he spent three years, before a spell at Beijing Enterprises in China.
In a short statement after the deal was confirmed, James told  Al-Qadisiyah's YouTube page : "I am delighted to have signed with Al-Qadisiyah Football Club, I am looking forward to joining this great club".
Al-Qadisiyah, who face Al Wahda in their next league game on January 31, are ninth in the table with 20 points from fifteen matches.
Igho Kingsley
Copyright ANS