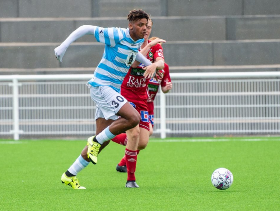 With a statement on their official website, Danish Superliga side Aalborg BK have confirmed the signing of Danish-Nigerian center forward Anosike Ementa.
Anosike ended his association with FC Helsingør by signing a three-year deal with Aalborg BK, keeping him at the club until December 31, 2023, and he'll initially play for AaB in the U19 League.
The 2.02 meters tall Anosike has been described as a clone of Nigeria international and former FC Midtjylland star Paul Onuachu due to his height and goalscoring credentials.
Commenting on the transfer of Anosike, AaB's sports manager Inge André Olsen said : "The affiliation of Anosike Ementa is done with a view to the future. He's a player we've been following for a while and we think he's a huge development potential.

"With his physique and his height, he is a player you immediately notice, and in addition to his goal threat, Anosike also has technical qualities, which overall makes him very exciting as a football player, and we look forward to getting him into our environment in AaB, so he can continue his good development".
Anosike netted 12 goals in sixteen appearances for Helsingør's U19s and played three games for the first team prior to his departure from the NordicBet LIGA side.
Ifeanyi Emmanuel
Photo Credit : fchelsingor.dk
Copyright ANS
All rights reserved. This material, and other digital content on this website, may not be reproduced, published, rewritten or redistributed in whole or in part without prior express written permission from allnigeriasoccer.com