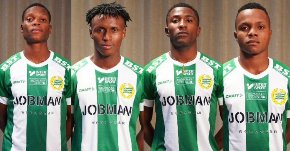 Swedish Allsvenskan side Hammarby have completed the signings of four Nigerian teenagers on a six-month loan.
They are forward Miekam Womene Zuokemefa, offensive midfielder Olatomi Alfred Olaniyan, central midfielder Oluwatobi Samson Abimbola and winger David Akpan Ankeye - all 18 years old.
Olaniyan was a key member of the Golden Eaglets squad to the 2019 Africa U17 Cup of Nations, starting all the five matches during the tournament held in Tanzania, but missed out on the roster to the World Cup in Brazil.
Providing a lowdown on the Nigerian quartet, Hammarby Head of Scouting, Mikael Hjelmberg told the club's official website : "Womene is a well-grown, smart forward with an impressive movement pattern. He comes from Aweskim Academy together with Oluwatobi who is an inner midfielder with great work capacity and is a real attitude player.
"Olatomi, known as Agüero, is an offensive midfielder who was Amoo's teammate in the Nigerian U17 national team.
"He has a low center of gravity and is very skilled in playing. He comes from Sido Academy, the same academy as Amoo, together with Akpan.
"The latter two players were largely ready for a larger European club, but chose to come to us instead, and that says a lot about the reputation we have built up".
The four promising Nigerian teenagers will initially train with Hammarby's cooperation club IK Frej to get acquainted with the new football environment.
Ifeanyi Emmanuel
Copyright ANS
All rights reserved. This material, and other digital content on this website, may not be reproduced, published, rewritten or redistributed in whole or in part without prior express written permission from allnigeriasoccer.com