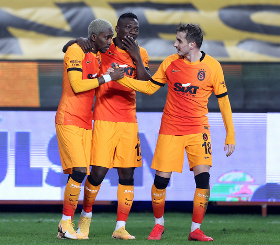 Nigeria international Henry Onyekuru was the star of the show as Galatasaray recorded a 2-1 road win over Gaziantep FK in a Turkish Super Lig clash at the Kalyon Stadium on Friday evening.
The Monaco loanee came on at half-time for his third debut for the Lions, four days after completing his move from the Principality side.
Five minutes into the second half, Onyekuru placed the ball in the far corner to open the scoring for the visitors after a perfect pass by Ryan Babel and the goal was awarded after a VAR check.
Twelve minutes from time, the Super Eagle doubled the advantage as he slotted past the goalkeeper after he was played through on goal by Kerem Aktürkoğlu.
Onyekuru and his Galatasaray teammates including Oghenekaro Etebo, who entered the game as a substitute in the 75th minute, were denied a clean sheet by Alexandru Maxim who scored in the eighth minute of stoppage time.
The former Eupen man was first loaned to Galatasaray by Everton in the 2018-2019 season, then by Monaco last winter for a period of six months, before returning for a third spell this month.
With today's victory, Galatasaray extended their winning streak to three and climbed to second in the Super Lig standings with 42 points, two behind Istanbul rivals and table-toppers Besiktas.
Igho Kingsley
Photo Credit : galatasaray.org
Copyright ANS