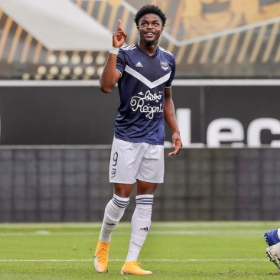 Allnigeriasoccer.com can exclusively report that Fulham are aiming to sign Nigeria international Josh Maja before the close of the winter transfer market.
Negotiations between the Cottagers and French Ligue 1 outfit Bordeaux are at an advanced stage and the striker would be joining the Premier League side on loan for the remainder of the 2020-2021 season if an agreement is reached.
Maja was a non-playing substitute for Bordeaux in their latest league match against Olympique Lyon ahead of a possible departure from Les Girondins.
Maja's agent, Emeka Obasi of Elite Project Group has close ties with Fulham, brokering the deals that took Ola and Jordan Aina to the club in the summer transfer window, and also used to look after RB Leipzig loanee Ademola Lookman.
London-born Maja could be returning for a second spell at Fulham as he spent his formative years as a footballer with the club before transferring to Sunderland, for whom he scored 17 goals in 49 appearances.
The 22-year-old has a contract with Bordeaux until the end of the 2022-2023 season.
Maja made his senior debut for Nigeria in an international friendly against Ukraine in September 2019, coming off the bench to replace Victor Osimhen in the closing minutes.
Ifeanyi Emmanuel
Copyright ANS