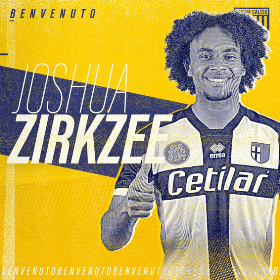 Through a statement on their official website, Italian Serie A club Parma have confirmed the capture of Dutch-Nigerian striker Joshua Zirkzee.
The Netherlands U21 international has been loaned out by European champions Bayern Munich until the end of the 2020-2021 season, after which Parma will have the option to make the transfer permanent.
Zirkzee was eager to move on to pastures new in the winter transfer market after falling down the pecking order of strikers at Bayern with the arrival of Cameroon star Eric Maxim Choupo-Moting.
The 19-year-old has registered 4 goals in seventeen first team appearances for the Bavarians, of which four were starts.
Everton had explored the possibility of signing the Super Eagles target before Parma won the race for his signature.
Nigeria international midfielders Joel Obi and Obiora Nwankwo have represented Parma in the past.
After 20 matches in the Italian top-flight, The Yellow and Blues sit 19th in the 20 team table with 13 points before their next game against Bologna.
Igho Kingsley
Copyright ANS