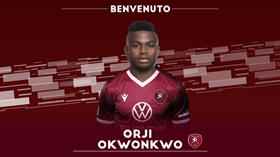 Four players of Nigerian descent Daryl Dike, Orji Okwonkwo, Kingsley Michael and Mustapha Olagunju sealed loan moves away from their clubs on transfer deadline day.
Championship club Barnsley have officially announced that newly-capped United States international Dike has joined on loan with an option to purchase from MLS side, Orlando City, until the end of the 20-21 season, subject to international clearance.
The 20-year-old striker has been assigned the number 10 jersey at Barnsley and will link up with his new employer before their Championship match against Derby County on Saturday.
League Two club Port Vale have brought in central defender Mustapha Olagunju on loan from Huddersfield Town until the end of the season.
The 19-year-old made his Huddersfield debut in their FA Cup third round tie at Plymouth Argyle at the start of January.
Italian Serie B club Reggina have completed the temporary acquisition of 2015 U17 World Cup winners Orji Okwonkwo and Kingsley Michael.
The Bologna-owned players will be spending the remainder of the campaign at Reggina.
Igho Kingsley
Copyright ANS