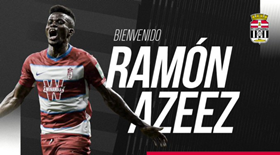 LaLiga SmartBank club FC Cartagena completed the signing of Nigeria international Ramon Azeez before the close of the winter transfer market.
The Albinegros confirmed via their official website that they reached an agreement with the player Azeez  and with Granada CF for the loan of the Spanish-Nigerian soccer player until the end of the season.
Azeez was frustrated over his lack of playing opportunities at Granada in the new season and decided to join another team where he will play on a regular basis.
Of the 34 matches contested by Granada in all competitions this season, the Super Eagle was involved in only four - two in La Liga and two in Copa del Rey.
Azeez comes with a wealth of experience, with 71 appearances in La Liga since his debut and 89 in the second-tier.
On the international scene, he has represented Nigeria at the U17, U20 and senior World Cups.
FC Cartagena are 21st in the  LaLiga SmartBank standings with 21 points from twenty-three matches.
Ifeanyi Emmanuel
Copyright ANS