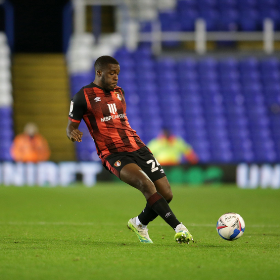 Scottish Premiership side Glasgow Rangers have announced the signing of Nigeria youth international Nnamdi Ofoborh from AFC Bournemouth on a four-year deal with effect from the summer.
The Cherries are due training compensation as the central midfielder was offered a new contract in addition to being a player under the age of 24.
Ofoborh, who starred for the Flying Eagles at the 2019 U20 World Cup, is spending the second half of the season on loan at Wycombe Wanderers, whom he helped seal promotion to the Championship last season.
"We look forward to welcoming Nnamdi to our group in the summer. We are extremely impressed by his qualities and he is a player that has real progression in him," Rangers sporting director Ross Wilson told the club's official website.

"He has a positive and determined personality and is very much looking forward to becoming a Rangers player at the end of this season.

"In the meantime we are really pleased that Nnamdi will play week in week out until the end of the season in the Championship at Wycombe, a club he excelled at previously under Gareth Ainsworth."
Nigerian duo Calvin Bassey and Joe Aribo are contracted to Rangers for next season, while the Light Blues have a one-year option in Leon Balogun's contract.
Ifeanyi Emmanuel
Photo Credit : afcb.co.uk
Copyright ANS