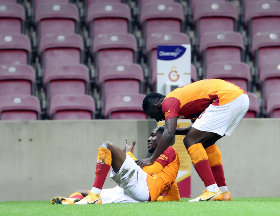 Henry Onyekuru scored for the second game running as Galatasaray thrashed Istanbul Basaksehir 3-0 at the Türk Telekom Stadyumu on Tuesday evening.
Three Nigeria internationals were picked in the starting lineup, Onyekuru and Oghenekaro Etebo for the Lions and Azubuike Okechukwu for the visitors.
In the 45th minute, the Monaco loanee gave Galatasaray the lead with a bullet header from a brilliant delivery into the box by Ryan Donk.
Donk turned from provider to scorer when he headed home a corner in the 64th minute and then Mostafa Mohamed converted a spot kick to make it 3-0 in the second minute of stoppage time.
Four days ago, in his first game for Galatasaray after returning for a third loan spell, Onyekuru bagged a double and has now taken his tally up to three goals in his first two games.
Galatasaray have closed the gap on leaders Fenerbahce to three points after twenty-two matches played.
The aforementioned Super Eagles players did not finish the game; Etebo was substituted at half-time, Okechukwu was replaced in the 88th minute and Onyekuru in the 92nd minute.
Ifeanyi Emmanuel
Photo Credit : galatasaray.org
Copyright ANS