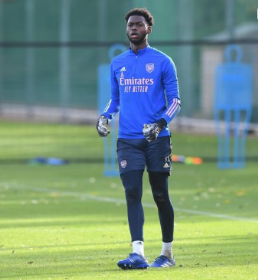 Wolverhampton Wanderers have completed a league double over Arsenal, beating the north London team 2-1 at the Molineux Stadium on Tuesday evening and ending their seven-match unbeaten Premier League run in the process.
New York City-born midfielder of Nigerian descent, Owen Otasowie was included in Wolves' matchday sqaud but didn't get off the bench for the third game running in the Premier League.
The Gunners controlled the game in the first half and deservedly took the lead through Nicolas Pepe in the 32nd minute, Rúben Neves converted a penalty to restore parity after David Luiz was sent off in first half stoppage time, João Moutinho put Wolves in front with a stunner from distance on 49 minutes.
Allnigeriasoccer.com understands that teenage Nigeria-eligible goalkeeper Arthur Okonkwo was part of Arsenal's traveling squad to the West Midlands as the 21st man.
There is every indication that Okonkwo will be included in his first matchday squad when Arsenal travel to Aston Villa on Saturday as first choice goalkeeper Bernd Leno is not eligible to be fielded after he was shown a straight red card for handling the ball outside his area in the 72nd minute vs Wolves.
Additionally, Brighton & Hove loanee Ryan is doubtful for the trip as he has not been able to train this week due to a muscular issue.
The Anglo-Nigerian has been officially informed by manager Mikel Arteta that he is now Arsenal's fourth choice goalkeeper for the remainder of the 2020-2021 season and was picked over Estonia's first choice glovesman, Karl Hein who has started six of the last eight games played by his national team.
Okonkwo has been training with Arsenal's first team for the most part of the last one month just in case cover is needed for the three goalkeepers Leno, Mathew Ryan and Rúnar Alex Rúnarsson.
Ifeanyi Emmanuel
Copyright ANS