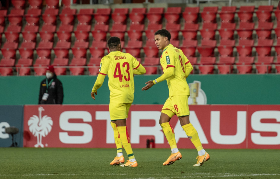 Emmanuel Dennis opened his goalscoring account for German Bundesliga club FC Cologne as they lost on penalties to SSV Jahn Regensburg in the DFB-Pokal on Wednesday night.
The Super Eagle lost his way at Club Brugge and has been farmed out on loan to Cologne until the end of the season in a bid to revitalize his career after falling out of favour with manager Philippe Clement.
Dennis lasted 82 minutes on the pitch during his Bundesliga debut for Cologne at the end of last month and retained his place in the starting lineup for tonight's fixture.
Ismail Jakobs gave Cologne a dream start when he slotted in off the post after Dennis cleverly dummied a pass from Jannes Horn in the fourth minute.
And it became 2-0 midway through the first half, the Nigeria international fired home at the near post after he was fed by Jakobs, but both teams were level heading into the interval with Scott Kennedy and Jan George finding the net for the home team.
Dennis was handed an opportunity to make it 3-2 from the penalty spot after Jahn Regensburg handled in the area but the number 43 saw his effort saved in the 78th minute, before making way for young Nigerian forward Tolu Arokodare in the sixth minute of extra time.
Cologne missed their last two penalties and crashed out of the DFB-Pokal in the last sixteen.
Ifeanyi Emmanuel
Photo Credit : fc.de
Copyright ANS