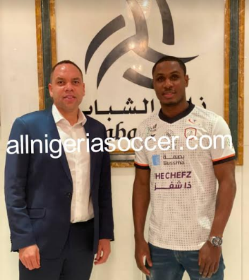 Saudi Arabian Professional Football League club Al-Shabab have officially announced the signing of former Manchester United striker Odion Ighalo following a successful medical.
The 2019 Africa Cup of Nations top scorer ended his association with Chinese Super League outfit Shanghai Shenhua after putting pen to paper on a two-and-a-half-year contract with Al-Shabab, keeping him at the club until the end of the 2022-2023 season.
Allnigeriasoccer.com can exclusively report that Shanghai Shenhua agreed to part company with Ighalo in exchange for 2.5 million euros (around N1.44 billion in Nigerian currency).
The 31-year-old Ighalo has been assigned the number 89 jersey for the rest of the season.
A product of Julius Berger, he began his career abroad with Lyn Oslo, followed by spells at Udinese, Granada and Cesena, before returning to Granada.
He made a name for himself at Watford, scoring 39 goals in 100 appearances before switching to Changchun Yatai in January 2017.
Ighalo became the first Nigerian-born player to feature for Manchester United when he debuted for the Red Devils against Chelsea in February 2020.
The deal taking Ighalo to Al-Shabab was brokered by Norwegian-based Nigerian agent Atta Aneke.
Ifeanyi Emmanuel
Copyright ANS