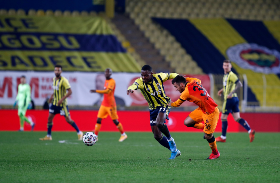 Former Queens Park Rangers star Bright Osayi-Samuel was on parade at the Stadyumu Fenerbahçe Şükrü Saracoğlu Spor Kompleksi as Fenerbahce lost their second straight home match against Galatasaray on Saturday evening.
There was also a start for Monaco loanee Henry Onyekuru, while another Super Eagles player in Oghenekaro Etebo entered the game as a substitute with three minutes remaining.
Mostafa Mohamed, with a classic touch, finished brilliantly to score the game winning goal nine minutes after the restart, becoming the first-ever Egyptian player to score in the Intercontinental derby in the process.
A minute before the match-winner, Onyekuru was presented with a glorious opportunity to break the deadlock but goalkeeper Altay Bayındır produced a brilliant save to deny the Nigerian from close range.
Osayi-Samuel actualized his dream of playing alongside Mesut Ozil when the marquee signing from Arsenal came on for his home debut in the 63rd minute.
And the 2014 World Cup winner almost made an immediate impact but Ozan Tufan saw his headed goal from a free-kick floated into the box by the German playmaker ruled out for offside after a VAR review.
Osayi-Samuel had two chances to score but fluffed his lines in the 33rd and 70th minute.
Galatasaray have now overtaken Fenerbahce in the Super Lig standings, albeit on goal difference, after their fifth win on the bounce.
Ifeanyi Emmanuel
Photo Credit : fenerbahce.org
Copyright ANS