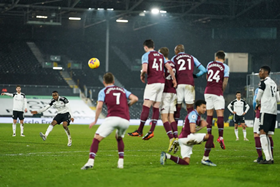 Fulham winger Ademola Lookman was understandably frustrated following the goalless draw against West Ham United at Craven Cottage on Saturday evening.
The 2017 U20 World Cup winner revealed that the Whites controlled the game but failed to convert their chances into goals.

Lookman had a chance to open the scoring in the 36th minute but skidded his shot inches wide while Adarabioyo saw his header fly over after getting free from a corner.
In the closing minutes, Chelsea loanee Ruben Loftus-Cheek and substitute Aleksandar Mitrović could have ended the evening as the match-winner but saw their shots go wide.
Speaking to Sky Sports, Lookman said : "We dominated but we've got to take our chances. We know what we need to do.

"All I can say is that we have to keep working hard. As a team we need to use this frustration as a fuel to keep performing.
"We need to win games and we need to score goals."
Fulham's draw leaves them eighteenth in the standings with 15 points, eight less than Burnley who are seventeenth.
Ifeanyi Emmanuel
Photo Credit : fulhamfc.com
Copyright ANS