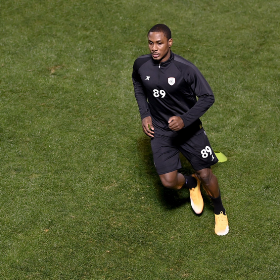 Odion Ighalo made his competitive debut for Al-Shabab as they recorded a comprehensive 4-1 win over Al Raed in a Saudi Arabian Pro League match on Saturday, two days after the former Manchester United striker completed his move.
The 2019 Africa Cup of Nations top scorer entered the game as a substitute in the 84th minute, replacing Abdullah Alhamddan.
Ighalo says he is delighted to join Al-Shabab and is aiming to score goals for the Riyadh club to help them win their first league title since the 2011-2012 season.
Al-Shabab currently top the standings with 35 points from 17 games and are looking to make a big statement of intent with a win against Al Nassr in the Riyadh derby next weekend.
Speaking to reporters shortly after his debut, Ighalo said : "I am happy to be at Al-Shabab. Before my arrival, the team was having good  results, and I participated in a few minutes, but I look forward to participating more."

Ighalo continued: "I promise the Al-Shabab fans to score many goals, and also to win matches and make the difference. I hope the team wins all the matches, which is the important thing.

"I hope that Al-Shabab will continue with the same good performance to win the league championship by the end of the season.
"My aim is to score goals, and I hope to score, but the most important thing is the victory of the team, which is what we aspire to".
Ighalo has signed a two-and-a-half-year contract with Al-Shabab and his former club Shanghai Shenhua will pocket 2.5 million euros from the deal.
Ifeanyi Emmanuel
Copyright ANS