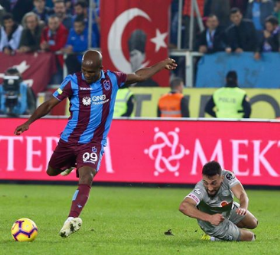 Former Super Eagles invitee Anthony Nwakaeme was on target to help Trabzonspor register a 2-0 road win against Yeni Malatyaspor in the Turkish Super Lig on Monday evening.
After a cagey first half, both teams were level at the break but Trabzonspor were quick out of the blocks in the second half with Anastasios Bakasetas breaking the deadlock in the 49th minute.
With almost the last kick of the game, Nwakaeme showed good composure to strike the ball home from an acute angle in the fifth minute of stoppage time.
It was the latest goal scored by the former Hapoel Beer Sheva star since his arrival in Turkey in August 2018, beating his previous mark of 94 minutes which was achieved against Krasnodar in the group stage of last season's Europa League.
Nwakaeme has been in great form in his last eight matches in the Super Lig, directly participating in seven goals (3 goals, 4 assists).
Today's win sees Trabzonspor move up to fourth in the table and six points behind Galatasaray who lead the way with 48 points.
Igho Kingsley
Copyright ANS