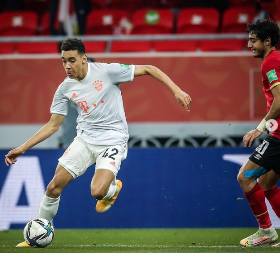 Former Chelsea prodigy Jamal Musiala is in line to be involved in some capacity when Bayern Munich trade tackles with CONCACAF champions Tigres in the final of the FIFA Club World Cup on Thursday evening in Qatar.
The German-born attacking midfielder of Nigerian descent helped the European champions reach the showpiece, coming off the bench for the last twelve minutes in yesterday's win against Al Ahly.
Out-of-favour Super Eagles striker Junior Ajayi was a non-playing substitute for the Egyptian powerhouse.
Bayern Munich took the lead through Robert Lewandowski in the 17th minute and the Pole doubled the advantage when he headed in a cross from Leroy Sane with five minutes remaining.
The last player of Nigerian descent to feature in the Club World Cup final was Victor Moses, who started for Chelsea in their 1-0 loss to Corinthians in the 2012 final, and Musiala could follow in his footsteps if handed minutes by manager Hansi Flick against the team from Mexico.
Musiala attended Whitgift School in Croydon which produced current Chelsea players Moses and Callum Hudson-Odoi.
He is set to sign his first professional contract with Bayern Munich later this month.
Ifeanyi Emmanuel
Photo Credit : fcbayern.com
Copyright ANS