...the complete Nigerian football portal
Subscribe
'Wenger Was An Idol To Me' - Ex-AFOTY Ikpeba Urges Arsenal To Go Back To Their Old Ways Of Playing
Published: February 09, 2021 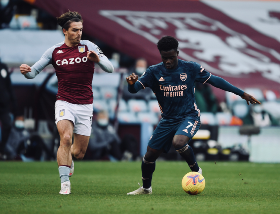 Former African Footballer of the Year Victor Ikpeba is urging Arsenal to go back to their old ways of playing football and has ruled out the north London club finishing in the top six positions in the Premier League with the players at their disposal.
Arsenal's former coach Arsene Wenger recommended the signing of Ikpeba while he was coaching Monaco and the retired Nigeria international has confessed that he supports the Gunners.
The empire that the experienced Frenchman built at Arsenal is falling apart and even the appointment of ex-PSG manager Unai Emery and later former captain Mikel Arteta has not steadied the ship.
In fact the Emirates Stadium outfit were flirting with relegation this season before winning five of their six matches, December 26 to January 26.
Speaking on Super Sport's Monday Night Football monitored by allnigeriasoccer.com, Ikpeba said :"They have not been able to manage this team since Arsene Wenger left the club, they brought in two managers and allowed some great players to leave the club, so it's all about rebuilding now for Arsenal to get back to their old ways of playing football.

"Deep mentality we know about the Gunners of the past but what I'm seeing in the past three, four seasons.

"I am a big fan of Arsenal, the former manager Arsene Wenger was like an idol to me, he was a manager who brought me to AS Monaco.
"I know his philosophy and from what has happened in recent years, the fans should accept that they have a squad that is not good enough now to end the season in the top six".
Arsenal have picked just one point from their last three matches and are currently sat eleventh in the table with 31 points from 23 matches.
Igho Kingsley
Photo Credit : arsenal.com
Copyright ANS