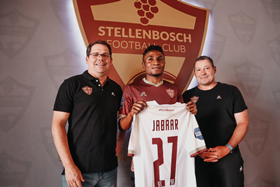 South African DStv Premiership club Stellenbosch FC have officially announced the signing of Nigeria youth international Ibraheem Jabaar.
The financial terms and length of contract have not been disclosed by the Western Cape side.
Jabaar was a member of the Golden Eaglets squad to the 2019 U17 World Cup, playing four matches as a substitute during the tournament in Brazil.
The 18-year-old starred at the 2019 Africa U17 Cup of Nations, where he made five appearances including three as starter and found the net against Tanzania and Uganda.
Stellenbosch FC are managed by ex-SuperSport United midfielder Steve Barker, a nephew of famous South African coach Clive Barker.
Jabaar links up with former Nigeria U23 international winger Stanley Dimgba at Stellenbosch FC.
The Stellies are 12th in the  DStv Premiership standings with 15 points from 14 matches played before their next game in the division against Golden Arrows this coming Friday.
Igho Kingsley
Photo Credit : stellenboschfc.com
Copyright ANS