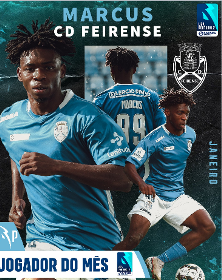 CD Fierense Nigerian attacker, Abraham Marcus was voted the best player in the Liga 2 Portugal by the coaches of teams playing in the league.

The 21-year-old received 15.00% of the votes, the same percentage as Mohamed Bouldini, from Académica Coimbra, and the tiebreaker was made through the playing time played during the period in question.

Marcus spent less minutes on the pitch than Mohamed , so the distinction was awarded to the campfire athlete.

The podium is complete with Crespo, midfielder from Estoril Praia, with 12.00%

Abraham Marcus has scored a total of 7 goals with an assist to his name from 12 games this season, making him one of the most effective forwards so far in the league.