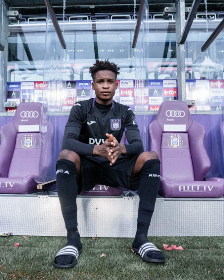 RSC Anderlecht have qualified for the quarterfinals of the Belgian Cup after a convincing 5-0 win over Royale Union Saint Gilloise at Stade Joseph Mariën on Thursday night.
Manager Vincent Kompany brought on Paul Mukairu as a replacement for Jacob Bruun Larsen with 58 minutes gone.
Three minutes after the introduction of the Antalyaspor loanee, he made it two goals in as many matches in the Belgian Cup, heading home a cross from left-back Bogdan Mykhaylichenko.
Anderlecht's other scorers were Manchester City-owned striker Lukas Nmecha and Abdoulay Diaby who netted two goals each.
Following their win against Royale Union Saint Gilloise, the Purple & White will face Ike Ugbo's Cercle Brugge in the last eight.
Mukairu made a loan switch to RSC Anderlecht last summer window and has wasted no time in getting up and running.
The 21-year-old has been involved in eight goals (4 goals, 4 assists) in 18 appearances across all competitions for Anderlecht.
Igho Kingsley
Photo Credit : rsca.be
Copyright ANS