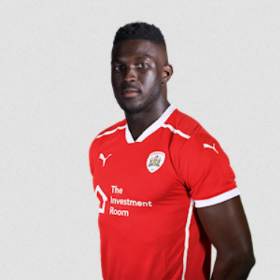 Bright Dike's younger brother, Daryl will make his Championship debut for Barnsley on Sunday afternoon, barring an injury in the pre-match warm up.
The Nigeria-eligible attacker has been included in the starting line against Brentford at Brentford Community Stadium while Nigerian-born striker Victor Adeboyejo starts on the bench.
Dike came off the bench to replace Adeboyejo in the 59th minute of Barnsley's 1-0 loss to Chelsea in the Emirates FA Cup on Thursday.
The 20-year-old Orlando City-owned striker is spending the rest of the season on loan at Barnsley and has come to the Championship with a huge reputation after he was named Rookie of the Year and a finalist for AT&T MLS Young Player of the Year.
In a breakout campaign, Dike scored eight goals and registered four assists in 22 appearances in all competitions for Orlando City.
Barnsley have an option to buy the young striker permanently at the end of the season while Orlando City inserted a conditional right of recall into the loan deal.
Igho Kingsley
Photo Credit : barnsleyfc.co.uk
Copyright ANS