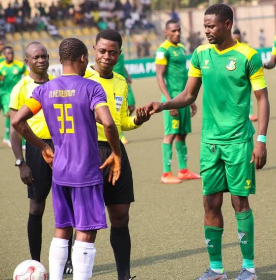 On matchday 10 of the Nigerian Premier League we saw some interesting games and results that we want to take a closer look at and analyze today.


Kwara United was able to move to the top of the table and the Kano Pillars also convinced once again and celebrated their third win in a row.
With the live trends and statistics from Overlyzer, the progress of the game can be easily witnessed.
Nasarawa United surpasses Akwa


In a key game, Nasarawa United narrowly beat Akwa United 2-1. The home team built up a lot of pressure in the first half, only the goal was missing for a long period of time.
It was in the 55th minute that Adamu Hassan made it 1-0 for Nasarawa, which was equalized just eight minutes later by Ndifreke Udo Effiong.
In the final phase, however, Nasarawa was able to build up dominance again and in the fifth minute of stoppage time Adamu Hassan's second goal made it 2-1 and thus made the victory for the home team possible, which moved up to sixth place in the table and overtook Akwa.

Kano Pillars celebrate their third win in a row

After two wins in a row, the Kano Pillars wanted to extend their streak against MFM at home.
An even game developed in which both teams had their chances, but the major pressure situations did not materialize.
MFM acted defensively and did not allow many chances for the clear favorite. In stoppage time, however, the decision was made: Umar Hassan scored the 1-0 for the Kano Pillars after 94 minutes and thus secured the next victory and also the third place in the table.

The new Premier League leader Kwara United still plays really convincing. The home team managed to make a good start at Kwara State Stadium and immediately pushed the guests into their own half. In our graphic it is clearly visible that the Akwa Starlets were practically never able to free themselves within the first 20 minutes and consequently had to accept the 1-0 scored by Wasiu Alalade after 14 minutes.
Later the game was a bit more balanced, but Kwara still had advantages and more chances to score. A double pack in the second half ultimately made the decision: Immediately after Akwa's strongest phase, Michael Ohanu scored two goals that made it 3-0. Kwara has hereby pushed Enyimba from the top of the table.


Wikki Tourist's big problem still lies in their offense: The team with the fourth weakest attack of the league built up a lot of pressure against the Sunshine Stars and was the significantly better team, especially in the second half, but in the end the redeeming goal was missing.
With 56% possession and the better chances in the game, Wikki would have deserved the win.
Especially in the final phase of the game, the home team exerted a lot of pressure again - but in the end it stayed 0-0, which didn't really help both teams.
After ten games, Wikki Tourist only had to concede five goals, but only scored seven themselves…

In a not really attractive game, Katsina United was able to celebrate an unspectacular, but deserved win over the Jigawa Golden Stars.
In total, there were only three shots on goal in the entire game - and one was in. Samuel Lucio Kalu scored the golden goal for Katsina after 40 minutes, which fell exactly during the host's strongest pressure period.
In the second half, too, Katsina was the better team, but there were no more goals and so it remained 1-0 for the hosts, who recently stood out mainly with capricious performances.

This week in the Premier League

Next Sunday there are more interesting duels to come in the Premier League. The game between Enugu Rangers and Kwara United promises the greatest tension.
Enugu currently has one game less than Kwara and is four points behind the leaders.
So at the top of the league it remains tight and exciting, as is currently the case in several African leagues.
Ifeanyi Emmanuel