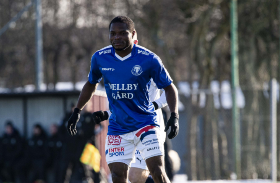 Swedish Superettan club Trelleborgs FF have announced via their official website that former Nigeria U20 international Henry Offia has signed a contract following a successful trial.
Allnigeriasoccer.com exclusively reported four days ago that Offia has put pen to paper on a three-year contract until the end of the 2023 season and this has been confirmed by Trelleborgs FF.
On his latest recruit Offia, sports director Salif Camara Jönsson told Trelleborgs FF's official website :  "We knew that he had a lot of speed and explosiveness, but during training and later also in the match against österlen, he has also shown more qualities.
"He is good at winning the ball high at the same time as he creates a lot of space for his teammates but also thanks to his physical properties comes to many positions in the box.

"He is a young player that we see great potential in. He has played in both midfield and attack earlier in his career but we see him mainly as a player for the offensive positions and with the qualities he showed during the test game, he should be interesting to follow with us".
A product of FC Dynamo Lagos, Offia previously turned out for Swedish clubs IK Sirius, Sollentuna FK and Dalkurd FF.
Ifeanyi Emmanuel
Copyright ANS