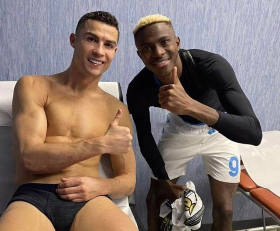 Italian football pundit Umberto Chiariello has not hidden his disappointment with the behavior of Victor Osimhen following Napoli's 1-0 win against Juventus in a Serie A match on Saturday.
The Nigeria international went to the Juventus dressing room to take pictures with Cristiano Ronaldo and Gianluigi Buffon after the game.
Chiariello, a journalist and columnist for Canale 21, as well as director of the sports editorial staff of Radio Punto Nuovo, also questioned the decision of Napoli to sign Osimhen last summer, pointing out that the former Lille striker  is not an established player in the mould of Romelu Lukaku,
"Did Osimhen understand that he is in Italian football and that he plays for Napoli? Why is he taking pictures with Cristiano Ronaldo and Gigi Buffon?",Chiariello was quoted as saying by Area Napoli.
"Napoli has bet on him even though he is not an established player. Inter have gone to Romelu Lukaku, who is a safe used, while Aurelio De Laurentiis has invested in bets".
Napoli's record acquisition at 70 million euros last scored for the Blues one hundred days ago, in a 1-0 win against Bologna.
Igho Kingsley
Copyright ANS