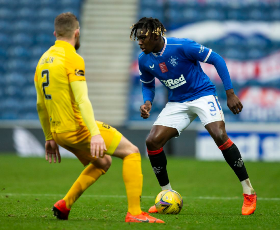 Glasgow Rangers boss Steven Gerrard has confirmed that the club have suspended five players, including two Nigerian youngsters in the shape of Calvin Bassey and Dapo Mebude, for violating coronavirus rules.
Bassey, Mebude, Bongani Zungi, Nathan Patterson and Brian Kinnear attended a party whilst nationwide lockdown rules were in place throughout the United Kingdom.
Furthermore, Gerrard revealed that the aforementioned players will be fined and removed from the first team squad.
Bassey joined Rangers last summer and has gone on to make 13 appearances for the first team - totaling 602 minutes .
Mebude is one of the standout players in the academy and is spending the second half of the season on loan at Scottish Championship club Queen of the South.
Speaking to Rangers TV (via Daily Record) , Gerrard stated : "First and foremost we have to acknowledge that five of our players have been involved in a breach of the Covid regulations.

"Which, from the top of the club to the bottom, we're all really disappointed in.

"That will be dealt with internally, the players will be fined and we are in dialogue with the SFA and the Government moving forward to find the solution in terms of those boys."

He added : " "Bongani Zungu is involved, Nathan Patterson, Calvin Bassey, Dapo (Mebude) who is part of the academy and is on loan at Queen of the South at the moment, and a young goalie who is in the academy but has spent some time in the first team at the moment, Brian Kinnear."
Nigeria internationals Joe Aribo and Leon Balogun trained with the Rangers squad at Auchenhowie before their trip to Belgium to face Antwerp in the last 32 of the Europa League.
Ifeanyi Emmanuel
Photo Credit : rangers.co.uk
Copyright ANS