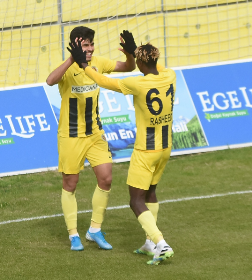 Nigerian center forward Rasheed Akanbi netted his first career hat-trick in the Turkish First League to help his team Menemenspor record a comprehensive 6-2 win over Akhisarspor at the Menemen Ilce Stadium on Saturday.
Ten minutes into the game, Akanbi doubled Menemenspor's advantage as he was on hand to tap in from close range after a header hit the woodwork.
Ridvan Kocak's right footed shot made it 3-0 before Peter Nsima opened his account for his new employer when he beat the goalkeeper from a tight angle in the 16th minute.
Akanbi got on the scoreboard again in the third minute of first-half stoppage time, rounding the goalkeeper before slotting the ball into an empty net.
The 21-year-old had to wait until the 91st minute for his hat-trick; he finished calmly after he was played through on goal by Mehmet Aytemiz.
He scored three goals in his first seven league matches for Menemenspor before missing the next five due to injury.
Akanbi is a product of Future Pro Academy, a grassroots club based in Lagos, which produced former Golden Eaglets and Flying Eagles skipper Ramon Azeez.
Igho Kingsley
Photo Credit : Menemenspor