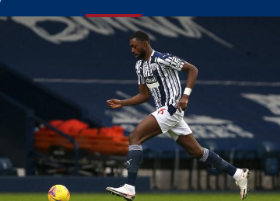 Legendary former Arsenal defender Martin Keown believes that referee Mike Dean made the right call to send off Semi Ajayi on the half-hour mark against Burnley but was baffled by the decision of the official not to award a penalty to the Clarets in the 53rd minute of the contest at Turf Moor.
Though Ajayi was a long way from goal, the central defender was dismissed  for the denial of a possible goalscoring opportunity after a VAR check, leaving the Baggies to play out two-thirds of the game with ten men.
Kyle Bartley looked to have handled the ball in the box but Mike Dean didn't bother consulting with the video assistant referee despite complaints by the Burnley players.
Keown was shocked that VAR was used for the incident involving Ajayi and it wasn't checked after the ball struck Bartley's arm.
"With [Kyle] Bartley I can’t believe the referee wasn’t asked to look at that on VAR, that is quite troubling," Keown said on BBC Radio Live.

"The first one was definitely a sending off, it was almost like he was playing table tennis - the arm came out instinctively. [Semi] Ajayi had to go and then I don’t understand

“I think they were hoping would be a nice easy game for Mike Dean, but there was lots of controversy and I thought it should have been a penalty."
Ajayi had received four yellow cards in 24 matches across all competitions this season before the goalless draw vs Burnely.
Igho Kingsley
Photo Credit : wba.co.uk