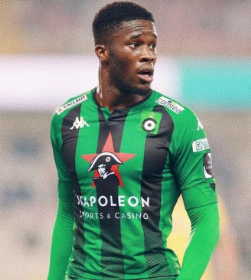 Chelsea loanee Ike Ugbo has equaled his personal single-season scoring record after finding the net in Cercle Brugge's 2-1 win against Royal Excel Mouscron on Saturday evening.
Before this evening's match, Ugbo's personal best for the number of goals in a single campaign was the thirteen he bagged when he played on loan at Roda JC in 2019-2020.
Thirteen minutes in, Ugbo broke the deadlock, heading in after a corner kick was not properly dealt with by the Royal Excel Mouscron defence.
The Super Eagles hopeful was unlucky not to double the advantage on the half-hour mark as he struck the post after going 1v1 with goalkeeper Koffi.
Kévin Denkey, who replaced Ugbo at minute 76, netted an insurance goal two minutes from time, rendering a 91st minute goal from Mouscron's Serge Tabekou a consolation.
A former England U17 international, Ugbo has pledged his international future to the Super Eagles and hoping to make his senior debut for the three-time African champions in the coming months, subject to completed paperwork.
Following today's win Cercle Brugge have climbed out of the relegation zone but have the same number of points (26) as Royal Excel Mouscron, who are seventeenth in the 18-team table after 28 games played.
Ifeanyi Emmanuel
Copyright ANS