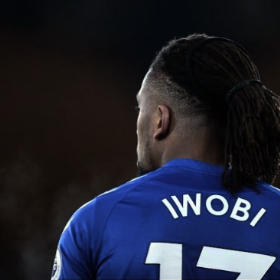 Alex Iwobi helped Everton register their first away win at Anfield since 1999, beating reigning Premier League champions Liverpool 2-0 courtesy of goals from Richarlison and Gylfi Sigurdsson.
The Nigeria international came off the bench as a replacement for Richarlison with four minutes remaining - his ninth appearance against the Reds since turning professional.
Prior to the matchday 25 fixture, Iwobi had not managed a win in eight previous appearances against Liverpool, drawing four and losing four, but he did away with the unwanted record on Saturday evening.
Richarlison put the Toffees ahead inside three minutes, slotting the ball past Alisson after a magnificent pass from  James Rodriguez and it became 2-0 seven minutes from time when Sigurdsson stepped up and converted from the spot.
A delighted Iwobi showed his love for Everton by posting a blue heart emoji on Instagram.
"💙 @everton," the Everton number 17 wrote.
In the race for Champions League qualification, seventh placed Everton have the same number of points as their city rivals, Liverpool (40) but Carlo Ancelotti's men have one game in hand.
Igho Kingsley
Copyright ANS