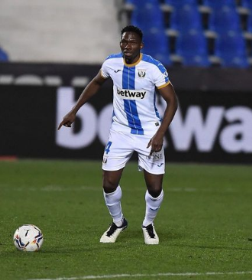 Leganes defeated C.D. Tenerife 1-0 at Estadio Municipal de Butarque on Sunday afternoon with former Chelsea center back Kenneth Omeruo on parade for the home team.
With five straight wins, The Pepineros set a new club record for consecutive wins, beating their previous four-match winning run they achieved three times in the past.
Omeruo played a key role in the new record set by Leganes as it was his 95th minute winner that secured a win for the club in the penultimate round of matches.
The Nigeria international also went the distance in all the matches in the winning run, putting in a full shift against CD Lugo, Girona and Albacete Balompié before starring against Almeria and Tenerife.
In a tight first half, both teams went into the interval with the scoreline at 0-0.
Eight minutes into the second half, Javi Hernández netted the game-winning goal from a corner kick from the left by Rubén Pardo.
After 26 matches played, Legeanes are fourth in the provisional standings with 49 points, three less than Espanyol who occupy the second automatic promotion spot.
Ifeanyi Emmanuel
Copyright ANS