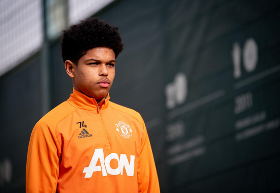 Versatile Manchester United winger of Nigerian descent Shola Shoretire is in contention to make his Premier League debut in the ongoing clash against Newcastle United at Old Trafford.
Red Devils boss boss Ole Gunnar Solskjaer has picked the Newcastle native in his matchday 20 but he starts on the bench - his first squad involvement for a Premier League game.
This is the second consecutive game Shoretire has been included in a matchday squad for the first team as he watched proceedings from the bench in the Europa League victory against Real Sociedad last Thursday.
Dubbed the 'New Jay-Jay Okocha', the 2004-born player started the 2020-2021 season as a first year scholar and signed his first professional contract with United around two weeks ago after turning seventeen years.
On a personal level, it would be an emotional game if Shoretire steps out onto the Old Trafford turf as he was on the books of Newcastle United before switching to Manchester United at the age of nine.
He has been allocated the number 74 jersey for Manchester United's first team.
Ifeanyi Emmanuel
Photo Credit : manutd.com
Copyright ANS