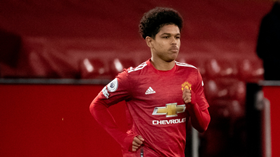 Newcastle-born winger of Nigerian descent Shola Shoretire made his professional debut on Sunday night as Manchester United defeated Newcastle United 3-1 to go back into second place in the English Premier League table.
Wearing the number 74 at the back of his jersey, the very talented teenager entered the game as a substitute in the 89th minute, replacing Marcus Rashford.
Shoretire has been thriving in Manchester United U23 squad and was promoted to first team training two weeks ago after signing his first professional contract.
The 17-year-old first got a taste of matchday experience three days ago in the Europa League round of 32 clash against Real Sociedad.
Shoretire has a past with United's opponents tonight Newcastle as he played for their academy team before moving to Old Trafford, where he has been since the age of nine.
Rashford established the lead for Ole Gunnar Solskjaer's side on the half-hour mark which Allan Saint-Maximin wiped off in the 36th minute, only for Daniel James to reestablish that advantage in the 57th minute and from the penalty spot Bruno Fernandes made it 3-1 with fifteen minutes left to play.
Ifeanyi Emmanuel
Photo Credit : manutd.com
Copyright ANS