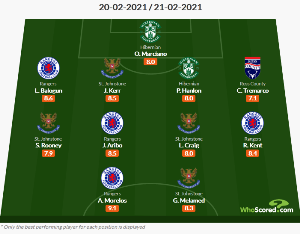 Leon Balogun and Joe Aribo have both been named in the Scottish Premiership Team of the Week by football statistics website Whoscored.com following their outstanding performance in Rangers' 4-1 rout of Dundee United at Ibrox on Sunday.
The Nigeria internationals had a hand in three of the four goals scored by the Light Blues, with Balogun providing an assist and Aribo setting up a goal before getting on the scoresheet.
In a 4-4-2 formation, Balogun was deployed at right back with Aribo one of the four midfielders,
The Super Eagles center back racked up a game-high four key passes, won four aerial duels, more than any other player on the pitch, and was accurate in 81.3 percent of his passes while competing a game-high five dribbles.
Balogun made two tackles, two interceptions and two clearances while making 96 touches.
As for Aribo, he played three shots, two of which were on target, made one key pass, won one aerial duel and had a passing accuracy of 80.4 percent.
Balogun was rated at 8.64 and his Super Eagles teammate was awarded 8.5 out of ten.
Igho Kingsley
Copyright ANS