...the complete Nigerian football portal
Subscribe
Rohr Explains Why Maja Didn't Play Much At Bordeaux; Another Fulham Player On His Radar
Published: February 23, 2021 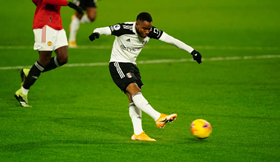 Gernot Rohr has been reminded that Josh Maja scored a brace on his full English Premier League debut for Fulham in their recent 2-0 victory against Everton ahead of his Super Eagles squad announcement in the coming days.
The Fulham academy product has not figured for the three-time African champions since making his debut off the bench in a 2-2 draw with Ukraine in September 2019.
Rohr explained that the striker didn't get a look-in because he wasn't playing much at French club Bordeaux but hopes he can continue with his good form with a view to a possible recall to the national team.
The German chose not to reveal the identity of the player but mentioned that he is keeping tabs on one other Nigerian player on the books of Fulham apart from Ola Aina.
Central defender Tosin Adarabioyo, winger Ademola Lookman and central midfielder Josh Onomah are the other players with Nigerian background playing for Fulham's first team.
"Coming back. I saw him (Maja) a lot in Bordeaux but he didn't play normal in Bordeaux, the new coach said he's not good enough," Rohr said to News Central TV.

"He's returning to England, scoring two goals, so we hope he can continue and stay for long.

"We have two other players in Fulham."
Tosin has played non-binding games for England's youth teams while Lookman and Onomah were key members of the Young Lions squad that won the 2017 FIFA U20 World Cup.
Copyright ANS