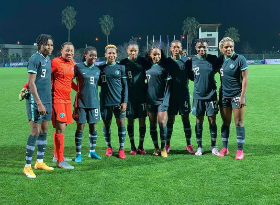 For the third consecutive game at the Turkish Women's Cup, African champions Nigeria kept a cleansheet, crushing Equatorial Guinea 9-0 at the EMR Sports Complex on Tuesday morning.
The Super Falcons' nine goals were shared across six different scorers with Barcelona striker Asisat Oshoala the top performer with four goals, while the others came from Ogbonna, Uchenna Kanu, Charity Adule, Toni Payne and Gift Monday.
Warning signs were there that it was going to be a high-scoring game as Ogbonna gave Nigeria the lead from a surge inside eight minutes.
Eleven minutes in, it became 2-0, Oshoala converting a penalty won by Payne and the former Arsenal star increased the lead when she scored again from the spot in the 13th minute.
Oshoala slotted into an empty net after beating the goalkeeper to make it 4-0 with 26 minutes played, Uchenna netted Nigeria's fifth, Adule with a header made it six in the 38th minute.
Two minutes before half-time, Sevilla star Payne netted her first goal in Nigeria colours when she beat two players and fired a screamer past the goalkeeper.
Coach Randy Waldrum wanted to give playing opportunities to the players and brought in Monday Gift, Ramat Abdulkareem , Esther Sunday and Maryam Ibrahim in the second half, with Chiwendu, Okeke, Payne and Uchenna Kanu making way.
Equatorial Guinea thought they could show some pride in the second part of the game but it didn't last as FC Robo captain Gift Monday scored the eighth goal in the 69th minute before Oshoala wrapped up the scoring five minutes from time.
The Super Falcons recorded 1-0 victories in their first two matches against CSKA Moscow and Uzbekistan.
Igho Kingsley