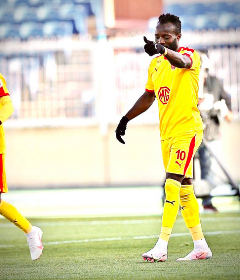 Former Flying Eagles striker Stanley Ohawuchi was back on the scoresheet as Al Qadasiya were held to a 2-2 draw by Al Batin in a Saudi Pro League game staged at the Al-Batin FC Stadium (Hafar Al-Batin) on Tuesday afternoon.
Ohawuchi had not scored for Al Qadasiya for 51 days before today's clash at the Al-Batin FC Stadium (Hafar Al-Batin), with his last strike coming against Al-Raed on January 2.
He provided the spark the game needed when he opened the scoring in the 17th minute, only for the goal to be cancelled out by Fábio Abreu two minutes into first half stoppage time.
Saleh Al Abbas put the home team 2-1 up at minute 73 but a goal from Charles Andriamatsinoro  rescued a point for Al Qadasiya.
The draw moves Al Qadasiya to sixth in the standings but twelve points behind Odion Ighalo's Al-Shabab who lead the way.
Ohawuchi was Ighalo's strike partner at the 2009 FIFA U20 World Cup held in Egypt.
Atlético Baleares, Ajman Club, Zamalek, Sliema Wanderers and Wadi Degla are the foreign clubs he represented in the past.
Igho Kingsley
Photo Credit : Twitter.com/StanleyOhawuchi
Copyright ANS