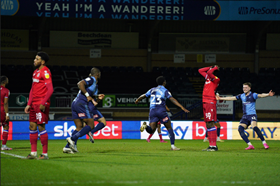 Three players of Nigerian descent were on target for their respective clubs in the English Football League on Tuesday, February 23.
We begin in the Championship. Lagos-born winger Fred Onyedinma opened his league account for the season as Wycombe Wanderers defeated Reading 1-0 at Adams Park.
The Chairboys clinched the win thanks to Onyedinma's close range finish three minutes after the restart.
Two divisions lower, Carlisle United lost 3-2 at home to Tranmere Rovers despite taking an early lead through Rotherham United loanee Joshua Kayode.
Kayode finished into the roof of the net after a great delivery into the box from Nick Anderton in the third minute, taking his tally in the League Two to 5 goals in 24 appearances.
Still in the division, Queens Park Rangers loanee Aramide Oteh's 66th minute goal was only a consolation with Colchester United losing 2-1 to Exeter City at the JobServe Community Stadium.
It was his first goal since joining Colchester United in the January transfer window.
Igho Kingsley
Photo Credit : wwfc.com
Copyright ANS