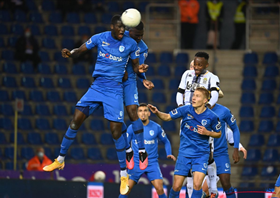 Stade du Pays de Charleroi to consolidate third position in the Belgian First Division A standings.
Seventeen minutes in, the Nigeria national teamer broke the deadlock when he converted a spot kick awarded after the Japanese Ito was fouled by Ilaimaharitra in the box.
Onuachu found himself in goalscoring positions before his opener; the lanky striker could not direct his header in the second minute and seven minutes later his feeble shot did not cause problems for goalkeeper Descamps.
Gholizadeh equalised for the home team six minutes after the interval but a goal from Thorstvedt on 83 minutes secured a win for Racing Genk.
Onuachu made way for Cyriel Dessers with ten minutes left to play.
The former FC Midtjylland goal poacher has tallied 25 goals in all competitions this term, his personal best in a single season since turning professional.
Onuachu has had a series of unconvincing displays for the Super Eagles, however, manager Gernot Rohr has confirmed that he's in the frame to be called up for the upcoming international matches against Benin and Lesotho.
Igho Kingsley
Photo Credit : krcgenk.be
Copyright ANS