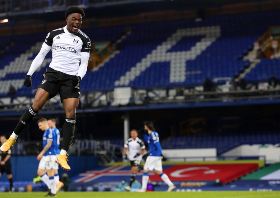 Josh Maja has got instincts of a natural born striker and showed that quality when he bagged a brace on his full Premier League debut against Everton on Valentine's Day.
Since the Super Eagles star made his debut for the Cottagers, they are unbeaten in four matches, winning two and drawing the others while keeping an impressive three clean sheets, and now the fans are confident that the arrival of the attacker on loan from Bordeaux in the winter transfer market could help them beat the drop.
Maja has a past with Fulham, spending three years in the academy before joining Sunderland.
On why he returned to Fulham, Maja told FFCtv : "It's great being back, I've obviously seen a lot of familiar faces and I'm just happy to be back in London as well, close to my family which is obviously a positive.

"I chose Fulham obviously because it's a big opportunity to play for my former club and to get game time especially. The big thing for me is playing football and I'm enjoying my time so far.

"Premier League football is the biggest league in the world and to be part of it now is great."
Nigeria manager Gernot Rohr is keeping tabs on Maja before announcing his roster for the 2021 Africa Cup of Nations qualifying matches against Benin and Lesotho.
Ifeanyi Emmanuel
Photo Credit : fulhamfc.com
Copyright ANS