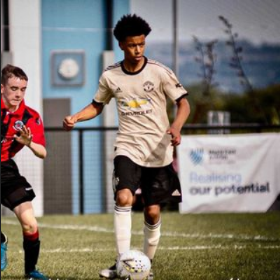 Promising Nigerian midfielder Maximilano Oyedele made his competitive debut for Manchester United U18s in their surprise 3-1 loss at the hands of Derby County on Saturday afternoon.
Oyedele was among the U16 players that started for the Red Devils at Trafford Training Centre, Carrington, while Manchester United academy products Ola Ibrahim and Osazee Aghatise started for the young Rams.
He was an unused substitute two weeks ago as Manchester United thrashed their neighbors Manchester City 4-2, his first squad involvement in the U18 Premier League.
Aghatise missed a chance to give Derby County the lead when he headed over from a cross before Charlie McNeill opened the scoring for the home team on 36 minutes.
Mothersille equalised just before half-time, Clarke made it 2-1 on 52 minutes and Aghatise put the icing on the Derby County cake with a third in the 71st minute to hand United a rare home defeat.
In the second half, Manchester United goalkeeper Guadagno prevented Oyedele from scoring an own goal when he made a brilliant save as the midfielder deflected a cross goalwards.
United return to action in the U18 Premier League next Saturday at away versus Liverpool.
Ifeanyi Emmanuel
Photo Credit : instagram.com/maxioyedele
Copyright ANS