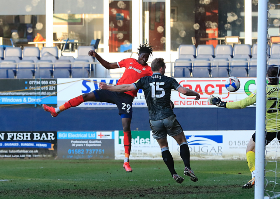 Three Nigeria-eligible strikers were on target for their respective clubs in Football League matches on Saturday, February 27.
In the Championship, Fulham academy product Elijah Adebayo netted a late winner as Luton Town came from two goals down to register a 3-2 win against Osaze Urhoghide's Sheffield Wednesday.
Four minutes from time, Adebayo made no mistake at the far post after he was set up by Harry Cornick.
The man-of-the-match contender provided a crucial assist as Ryan Tunnicliffe made it 2-2 just before the hour mark.
Adebayo has been involved in three goals (2 goals, 1 assist) since his move to Luton Town in the winter transfer market.
Former Golden Eaglets invitee also eligible for Togo and England, Daniel Udoh's late goal counted for nothing with Shrewsbury Town losing 2-1 to Bristol Rovers in a League One clash at the Memorial Stadium in Gloucestershire.
Udoh halved the deficit when he tapped home in the 92nd minute, taking his tally for the season to four goals across all competitions.
In League Two, Rotherham United loanee Joshua Kayode made it two goals in as many games but ended up on the losing side again as Carlisle United were beaten 3-1 by Oldham Athletic.
Thirty five minutes in, Kayode controlled his finish into the corner to give his side a one-goal advantage.
Igho Kingsley
Photo Credit : lutontown.co.uk