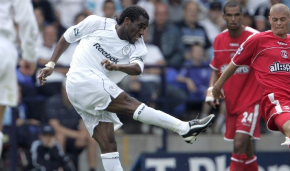 Brighton & Hove coach Graham Potter says Sam Allardyce deserves respect for his managerial career spanning three decades and remembers that the 66-year-old once managed an exciting Bolton Wanderers team that contained showboater Austin Jay-Jay Okocha.
Potter was speaking just before the Seagulls entered the pitch to face the Baggies in a Premier League clash they lost 1-0 after failing to convert two spot-kicks and saw a goal chalked off in the first half.
One of the most skillful players to have graced the Premier League, Okocha scored 14 goals in 124 appearances in the top-flight wearing the colours of Bolton Wanderers for four seasons.
"I remember his Bolton team which was a really exciting side with Jay Jay Okocha. They played really attacking, effective football," Potter was quoted as saying by BBC Sport.

"You can't have a career that Sam Allardyce has had without being incredibly competent. That's the truth. I have the utmost respect for people with that longevity."
A 1994 Africa Cup of Nations winner, Okocha was named Premier League Player of the Month for November 2003 - the first Nigerian player in history to win the monthly accolade.
Ifeanyi Emmanuel
Photo Credit : bwfc.co.uk
Copyright ANS