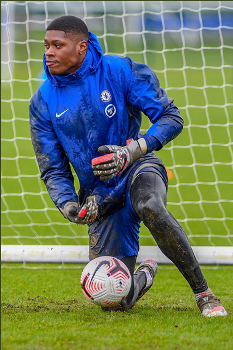 Former Golden Eaglets invitee Prince Adegoke was included in a gameday squad for a Chelsea team for the first time this season as the U18 side defeated Norwich City in an U18 Premier League fixture at Lotus Training Center on Saturday afternoon.
Previously, the Chelsea youth team coaches were not able to utilise the highly-rated goalkeeper because he had been recovering from injury.
Last September, Adegoke underwent meniscus surgery due to an injury he suffered during the warmup of a pre-season friendly against Crystal Palace.
The bulky glovesman was widely tipped to lay a claim for a starting spot in Chelsea U18s prior to his spell on the sidelines.
Against the Canaries, Adegoke watched proceedings from the bench for the entirety of the game, just as was the case during the 2017-18 and 2019-20 seasons when he was an unused substitute against Arsenal and Tottenham Hotspur U18 respectively.
Chelsea have high hopes for the Anglo-Nigerian youngster, offering him a scholarship last summer which was upgraded to a professional contract in November 2020.
Meanwhile, his Chelsea teammate Derrick Abu was a 92nd minute substitute against Norwich City - his sixth appearance in the U18 Premier League this season.
Ifeanyi Emmanuel
Copyright ANS